Having been around the block for a while, I've observed the belief systems that constitute the primary beliefs of most organized religions.  Every sect I've run across where people waive the holy-flag & salute the unholy one (often not quite sure which is which or if there is any difference at all), --all of those groups seem to eventually subjugate themselves to the doctrine of "Kissing Hank's Ass".  And, in such groups -- getting as close as possible to "Hank" is the end-all of divine goals bestowed upon mere men.

Sound corny? Well, it should. Because it is. Nevertheless, socialized religious sects seem to embrace the fundamental principles of kissing Hank's ass in many ways -- though seldom expressing the folly in such blunt terms.

This is the fundamental flaw of most sects/religions/politicos, etc., - expressed by the following anecdote:

Followers of Hank all seem to have several things in common: Higher Brain-Functions: Switched-off. They do not question. They do not demand that logical flaws be investigated for resolution.  Like most religions (& politics): Hank (if he exists) is a self-centered aggrandizing lawless prick.  And Hank's followers are people who lack the mental ammunition to ask the right questions (much less demand answers that make sense).  Sadly -- Hank's followers constitute the vast majority of religious people you'll meet -- probably even you.  It once was me.  Until I made the quality decision to "Kick Hank's Ass".
To do the job & do it well -- might I suggest some classes in fundamental law & logic.  System's analyst's make good lawyers -& the more intellect you bring to bear on the task of exposing Hank -- the more people who'll join you in an ass-kicking-campaign.  It eventually becomes a pleasurable hobby - to KICK Hank's ass.

Now with all of this talk about exposing Hank & his false doctrines - added to my iconoclastic viewpoint of most "religions"; --0ne might presume that I'm an Atheist.  Well, no; -- But Atheism or Agnosticism is a great place to start.  You see, they haven't bought into the libraries full of hank's bullsh!t.  Any honest Atheist will admit that their belief system is based on their own observations of "evidence" and that to date -- insufficient evidence has been presented to them in order to cause a fundamental shift in their belief system.  That's certainly a fair & rational viewpoint.  However, any questioning person who begins to look into the science of the universe in the microcosm will soon be confronted with a series of mathematical probabilities that strongly suggest (& I mean by trillions-of-trillions to one or more) an intelligent designer. What most discover is that the numbers themselves favor Intelligent Design - greatly favor it.  And I'm talking scientific method & statistical analysis ... not magic (I don't believe in magic ... but any sufficiently developed technical way of doing things is often indistinguishable from it). What anyone who studies the Bible will discover is that the God of Law does not go about breaking them - ever! And I would suggest that computers & virtual environments now give us an analog for creationism unparalleled in human history.

And ironically, -Judaism & it's progression into what is called "Christianity" are belief systems that expect people to be fully convinced in their own minds.  Although, you'd not know this looking at the mentally-challenged who are the vocal "leaders" of these "faiths" today!  My belief is that it's much easier for people to believe "Hank's lies" then it is to do the hard research & ask the right questions that leads a person to catch a glimpse of God. And this is why all the various "Hanks" out there get so much easy press.

According to the New Testament, the purpose of Yeshua/Jesus was to provide a nexus to God's existence from that of man's fallen (animal-like) condition.  Having a genius IQ & wide background in law & the sciences - my hypothesis was that Jesus was God's human analogue -- a man fully built & tested in all ways in order to be given an irrevocable trust: All that is of God. According to the new testament, Jesus (the 2nd 'Adam') became a life-giving spirit.  From a scientific, hypothetical perspective -- to rephrase: All that was Jesus changed from from corporeal into a high energy plasma (whether electrical or other scientific phenomena) and in that form he interacts with men to cause dramatic changes in order to bring about moral behavior.  Millions of people who have experienced this form of life changing experience can explain many of the ways in which they were changed in their predominant personality -- but cannot explain any scientific methodology as to HOW the changes happened.  In analog: Not understanding how a bridge is constructed --but trusting in it's ability to allow safe passage is the fundamental explanation of the term "faith".  I simply have a desire to understand the plausible physics behind what is a phenomena that sets Apostolic Christianity apart from all other world religions.  From what I can discern - the proverbial Spirit of Christ is a phenomena that dramatically affects the brain chemistry of those yielded to His influence. The model might be a tightly modulated, multi-phase electri'esque phenomena that affects the mind of one influenced by it by shaping the chaotic strange attractors that constitute though processes - w. the very mental anagrams of Jesus himself.  While it is difficult to explain this to people who do not have an understanding of the sciences interwoven to facilitate the process - there are examples in nature that give insight into the various components of the hypothesis. In my mind, the plausibility of this is so rational to conceive -- that it is not as much a matter of "faith" as it is a matter of astonishment concerning the brilliance of God to lawfully "hack" His way back into a creation that had been subjugated to such calamity by the 1st trustee - Adam (who had been deceived by one bent on challenging the very constitution of God's integrity). I regret that I cannot articulate what I understand - into an explanation here -- but it's taken decades to learn the principles used to form this hypothesis & in the process I have come to accept the fact that most people will never see the physical world in the resolution that my intellect allows my mind's eye.   However, the brilliance behind God's methodology is that it is not contingent on intellectuals to excogitate in order to affect "whosoever will". 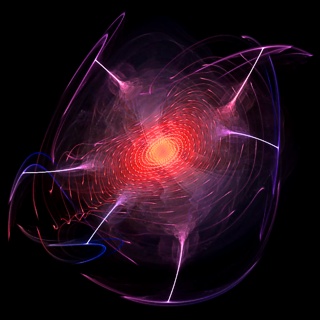 RUACH HA'KODESH: Roughly translated from the Hebrew - it's the "Holy Wind".  According to the creation account, it was the breath of God that gave life to man in the beginning. According to the New Testament - it is the same breath that puts new life in the animal-skin that is 'fallen' man.  And I would suggest, to anyone honestly seeking a convincing argument for the existence of God - to begin with a close encounter with people who extol the significance of the "baptism by the Holy-Spirit" (Turbulent Breath of God).  "Baptism" is a term that means "an overwhelming change in nature". Traditionally (& quite a matter of common sense), - such groups also outwardly illustrate this invisible phenomena with a one-time ritual that involves total immersion in water "in the name of Jesus" (commonly called "a baptism").  My experience has shown me that groups that do not adhere to the significance of "Jesus Name" or complete immersion generally do not adhere to (for lack of understanding of) other Scriptural principles -- resulting in a diminishing return regarding genuine encounters with "God's Breath" -- to the point that many "Churches" are nothing more than "psycho-babbling social clubs" that discuss so-called "Christian issues" while lacking the very manifestations that set Christianity (as recorded in the Scriptures) apart from all other world religions (& ironically - the Scriptures themselves warn of this very trend).
Disconnecting the rational & literary-basis, - from "religious principle" is a folly millennia old.  God, who invented the mind does not intend for it to be switched off. Jesus himself was a vocal opponent of "vain traditions of men".  "Belief-without-backing" groups are often "Hank-havens" & there are LOTS of them. And Hank's congregations are huge. They'll ask you to "accept by faith" the notions of everything from invisible golden plates to virgins waiting in the afterlife.  The advantage of demanding evidence (even if a personal & intangible experience) in the NOW is that you get to examine it -- mull it over: Use your mind.  Evaluate. I believe that God is 100% rational by His very nature. There is no confusion within Him.  It's His ways that frustrate the minds of men -- (As we're unable to reason the how's of the end result from early-stage steps).
Having an experience with the Spirit of God - is to the individual who has the experience - usually the best form of evidence they could have asked for.  Why? Rebuilding the psyche of a person in the blink of an eye is - to the individual experiencing the phenomena - more real than celestial fireworks & of great personal implications.  And, there are many things that transpire in the conversation of those so affected - that call & confirm to those around them (often in words uniquely germane to the hearer but of no particular significance to the speaker).   It is an amazing thing to encounter these phenomena in their proper, life-changing contexts.

Cross reference your experience/s with the Scripture & steer clear of the many "Hanks" that wish to exploit you for their own ends.