During the reign of Hitler's Nazi Germany, -the propaganda machine was turned to its maximum setting and among those persons that the state particularly wanted to defame - was the "Evil Jew".  Today we look thru the lens of history and most people understand precisely how evil it is to maliciously target a group of people because of one or more characteristics (yet fundamentally lawful traits) of many of the members that compose it.  I say "most people understand" because there are still many in society who find groups to defame in the EXACT SAME MANNER that the Nazi's did the Jews & others.  There are some groups that still view Jews as the Nazi's portrayed them. Parts of humanity never seem to learn.

Of course, there are evil men who identify themselves as "Jews". Do we opt to use those evil men to define an entire people? The Nazis did. Perhaps we should use Hitler and the Nazis to define what it means to be German? No?

One famous Rabbi once taught that a "A true Jew is one inwardly". Hmmm. It makes one wonder what it may mean to be a Jew inwardly - an "authentic Jew"? As a people, Jews are certainly defined by the writings of the Tenak.  And within the Tenak is the Torah - the Law of the Jews. Perhaps the Torah can be used to determine who the "real Jews" are among all those who claim the title, eh?

The Tenak says: "For the LORD your God is the God of gods and the Lord of lords, the great, the mighty, and the awesome God who does not show partiality nor take a bribe. "He executes justice for the orphan and the widow, and shows His love for the foreigner by giving him food and clothing. So show your love for the foreigner, for you were aliens in the land of Egypt." - Deu 10:18

In light of that excerpt from the Torah above - watch the brief video at this link and when you are done - ask yourself: "In light of the commandment above - is there EVIDENCE of any 'real Jews' in the video I just saw?" (a video recorded in Israel)! Did you notice the mob forming? What do you suppose would have happened to the foreigner if the police had not arrived? It is written: "You shall not follow a mob to do evil; neither shall you bear false witness in a cause nor follow the crowd to pervert justice" - Ex 23:2

My point is simple: Not all who claim to be a thing or look the part on the mere surface are genuine. The authenticity of a man to his claims are found in the evidence of his actions. And evil men will hold up the false representatives of that which they desire to vilify and say, "See how evil these all are"!  And men who lack wisdom are deceived by such lies and the evil mob grows.

St. Paul wrote: "Study to show thyself approved unto God, a workman that has nothing to be ashamed of, rightly dividing the word of truth." - 2Tim 2:15 And for those who take the time to study (say "study") the commandments in the Torah - we bind the commandment to the very letter -- in this case "מִ שְׁ כְּ בֵ י" focusing on a single Hebrew "כְּ".  And that kaf sets the entire context of the commandment. "AS" one would lie with a woman.  And when you study the LEGAL definition in the Torah as to how one is considered to have "Lain with a woman", then the commandment is restricted to that EXACT FORM. It puts a death sentence on penetrating a man and since man have only one orifice down there capable of such "penetration" -- the EXACT prohibition is against AnalSex and that is the ONLY THING the commandment prohibits!  And consider this: The best respected modern medical based health organizations have classified AnalSex as an incredibly dangerous act -- some +5000% more perilous than even 0ralSex! Wow! That peril is clearly sufficient to SHOW CAUSE as to WHY the act deserved to be banned by the law.  It's tremendously dangerous! No wonder it was named a capital crime in the Torah! 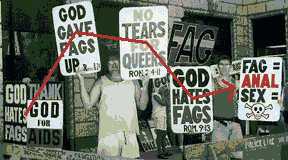 Those of us who experience same gender attraction know exactly how this dynamic works - especially those of us who by our nature are g0ys.  We know what it is like to be - by-implication, -slandered by shallow men who do not discern the righteous from the unrighteous (distinguish clean from the unclean) by anything other than superficial appearances and prejudices unbacked by any due diligence. And ironically, - g0ys know what it is like to be slandered by "religious" clerics who pervert the very words of the Torah/Bible into a lie - & falsely accuse g0ys of committing a capital crime (the false-accusation itself being an act of lawlessness in itself that the Torah names as a capital crime)! G0YS know what it's like to be falsely accused by murderous, lying religious hypocrites and know what it's like to live under the threat of the lawless, intellectually lazy & morally-lax, self-righteous mobs who follow them.  And many of us have known these threats since the coming of the bar mitzvah - sometimes earlier.

So, what do you suppose is the actual "end" of people who promote a lie that destroys the lives of others who are falsely accused of being guilty of committing capital crimes?  If the Scripture is true - then the end of those falsely accusing is the same judgment they pronounce on those they falsely accuse - which is their due, ironic, comeuppance!

It is written:   "If a false witness testifies against another person and accuses him of a crime, then both parties to the controversy must stand before the Lord, that is, before the priests and judges who will be in office in those days. The judges will thoroughly investigate the matter, and if the witness should prove to be false and to have given false testimony against the accused, you must do to him what he had intended to do to the accused. In this way you will purge evil from among you. The rest of the people will hear and become afraid to keep doing such evil among you. You must not show pity; the principle will be a life for a life, an eye for an eye, a tooth for a tooth, a hand for a hand, and a foot for a foot." - Deut 19:16-21

Do you think that God will not keep his own commandment?

And to those twisted imps who think they can hid behind the doctrine of "grace" regarding this gigantic offense, - let me show you where grace ENDS: "For with that verdict you pronounce, you will be judged; and with that measure you measure, it will be measured to you." -Matt 7:2

In other words, if the measure you use is a standard that happens to condemn the innocent, - the doctrine of "propitiated righteousness" becomes of null effect because your "right standing" before God becomes cancelled out by your standard that condemns the righteous.  Therefore the Scripture stays in harmony with itself. Ergo: Religious leaders & their followers go to the hell they obtusely preached that awaits all people who have same-gender relationships!

When you consider that the ACTUAL number of people who experience same-gender attractions approaches +65% of the population, - do you realize the overall mind-job the likes of those showcased below (false prophets) are responsible for -compounded with the self-inflicted guilt experienced by the affected masses; - Resulting tide of hypocrisy that threatens the life of everyone in its path!  Do you understand the sheer magnitude & scope of the destroyed lives, homicides and suicides that those God-damned religious-hypocrite-liars are culpable for?

Such men are universally ignorant & apathetic of fundamental law; - And yet pretend to be God's ambassadors! It is written: "With lofty but empty words, they appeal to the sensual passions of the flesh and entice the ones who are just escaping from those who live in error. They promise them freedom, while they themselves are slaves to corruption." - 2 Pet 2:19 Do you know how many people (many still on the child-side of adolescence) have been lied to & as a result of the lies, - come to believe that God has hated/rejected them - precisely because of the death-messages about mere same gender attractions from the likes of these preacher-liars?  Do you realize that the lies such snakes have told are the reason why there is such a God-hating streak in the "gay" community!  The reason why the "gay" community is virtually immune to the genuine gospel message is because of the false gospel pushed by the likes of those pictured above! To them, salvation is a formula composed of Jezuz+who you fuck. Their self-righteous hypocrite followers generally know (2) things: John 3:16 and that God hates fags (& they're not so sure about John 3:16).

Do you think God is going to excuse people who loudly encourage others to make difficult & destroy the lives of countless people based on false, indiscriminate, slanderous labeling? Do you think the blowhard, Brylcreem topped televangelist waving a Bible over his head & calling down curses indiscriminately against all same-gender-attracted people will escape hell himself? Got irony?

I've observed (1) common doctrinal pattern these liars seem to adopt: They take Paul out of context & put words into his mouth that he didn't pen (those who translate Scripture are especially culpable for this).
Peter specifically warned about them: "He (Paul) writes this way in all his letters, speaking in them about such matters. Some parts of his letters are hard to understand, which ignorant and unstable people distort, as they do the rest of the Scriptures, to their own destruction. Therefore, beloved, since you already know these things, be on your guard not to be carried away by the error of the lawless and fall from your secure standing." - 2 Pet 3:15b-17 Now I'll bring this to your attention right now: You need to ask yourself, "Is the guy who wrote what I'm reading now guilty of this very offense, - or is he pointing out something so glaringly obvious that the truth of it is transforming my life as I come to realize it?"

The overall lesson is: Don't commit the same error as your lying adversary. Don't throw the proverbial baby out with the bathwater. Nobody is 100% right/wrong all the time. If it was only as simple as a zero or a one. Where correct - commend; -Where in malice - condemn.  Remember: Part of the time (perhaps a small part) - even the likes of Fred Phelps was right. That is where they seduce their followers with the palatable sauce of facts in which they insert the spice of lies.  You must judge all continuously! And may you judge rightly!