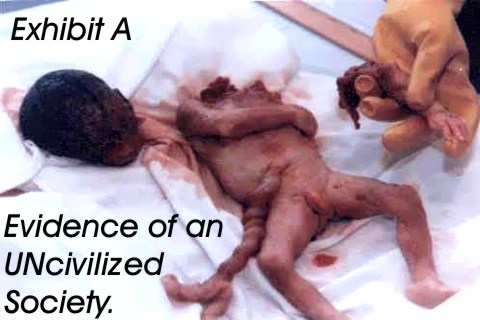 G0YS: We're about life & having it in more abundance. The image shown is that of a late term abortion. Any person with their moral center intact can see the inherent immorality in such a "procedure" that leaves this in its wake.  Apparently, THIS black-life didn't matter? ...

We, as g0ys, are not surprised that the same line of political thought that embraces AnalSex as "acceptable behavior", -also embraces abortion as an "acceptable choice".  Liars & murderers sing the same songs & use the same methods of manipulation.  Those who push an AnalSex agenda hide the truth behind the term of "gay rights"; --As those who promote abortion cloak the murderous truth behind the mantra of "women's rights". And for clarification I'll once again point out that EVERY health organization of any substance on planet earth has identified AnalSex as +5000% more perilous than even oral! It is the PRIMARY vector for the spread of sexually transmitted diseases - some deadly.

As g0ys, --we're PRO-LIFE. We understand that true liberty lives responsibly and that freedom is only genuine when the rights of others serve as boundaries. In other words: Your right to swing your arms ends where somebody else's nose begins.  Your right to take a nap is curtailed if you're driving.  Your right to burn down your own house is suspended until you know there is nobody else inside.

G0YS understand FUNDAMENTAL LAW (NATURAL LAW).  People who push abortion and AnalSex, -don't want to acknowledge natural law because they're sociopaths (& rules of any kind impair their selfish agendas).  Some people are simply evil & beyond the reason of simple morality.  Trying to reason with such is like trying to reason with a pig.  And that statement may yet be unfair to pigs.

will generally try to demonize the pro-life position by accusing it of being "religious".  Perhaps it is, but the unspoken assertion is that "religious" in on par with "irrational".  That may or may-not be true.  But the pro-life position is actually the logical conclusion of a simple, fundamental principle of natural law: The protection/s extended by reasonable doubt.

You see, the primary legal problem with the "Pro-Choice" position is that it cannot articulate nor demonstrate with any certainty - precisely when a "fetus" become a human-being.  The principle of uncertainty under natural law extends protection to give benefit of the doubt and, -ergo: The "potential person" is extended the protection of personhood.

I'll illustrate with an example.  Suppose a homeowner was going to demolish their old home so that they could use the land for another purpose.  It's their land and their house. It seems a no-brainer.  It's certainly their "right to choose" how to use their property. Well, here is where the "no-brainer" suddenly requires a brain: Suppose that somebody raises the possibility that the neighbor's child has gone inside of the house scheduled for demolition.  Is the demolition company at liberty to simply disregard that possibility & blow the place up on schedule? No.  Once the possibility is raised that there may be a person inside, --natural law requires steps be taken to verify that potential is not the case before action can be taken that may injure or destroy the person who may be hidden within.  This principle predates Moses.

Simply imagine the outcome if the foreman was to disregard the warning & proceed with the demolition --only to discover upon removing the debris that there indeed WAS a person inside! Would the law be silent? No! What would the law proscribe? It would prosecute the foreman criminally and civilly --as would anyone else involved in the demolition process (who had been notified of the possibility) be charged with criminal conspiracy. Manslaughter is the least serious charge that could be raised, --while murder being more likely.

The parallel to the abortion debate is completely on-point.  IF the PRO-CHOICE camp cannot demonstrate that the fetus is not "void of a person", --then the fundamental principle of discovery remains until that question can be answered in the negative. In other words: If "it" MIGHT be a "person", then the law extends the benefit of the doubt to protect what MIGHT be until it is proven (say "proven") otherwise.  And this is why Abortion is fundamentally immoral.  It is gross criminal disregard for the very-real possibility that a fetus is a human-being & a person entitled to the fundamental right of life.  If A=B and B=C then A=C.

And you will notice that nowhere in that argument does religion enter the picture.  If a "religion" recognizes natural law as the fundamental guidepost of moral behavior, -then it does well.  And religion (or a political belief system) that disregards natural law by edict - is simply an imperfect, perhaps evil philosophical system.  And keep in mind that ALL political belief systems are on par with religions - because both camps use philosophical theory as a guide to determine how to manipulate individuals & to what extent that manipulation is lawful.  This is precisely why the religious beliefs of politicians matter: Because you get an understanding of the individual's core philosophical systems & how they perceive "authority" & how they see themselves in relationship to others in that chain of authority.

And here is the giant caveat: If a person's concept of "God" is that of an abstract rule-maker unconcerned with the impact of natural law, --then you can be assured that such a person will rule in a like manner.  Better to have an agnostic who desires justice than a religious zealot who wants to appease an irrational God.

If it matters to you, --the author of this essay is an Acts 2:38-39 full-gospel believing Christian who places a great value on the teachings of Messianic Judaism.  As a result, -I believe that the only legitimate functions of any government are to protect life, liberty & property from the acts of the immoral - acts that are self-evidently mala-in-se'.  Whereas the virtues of society should be left to develop completely by themselves.