Excerpted from: The HIV Homofascist Identity 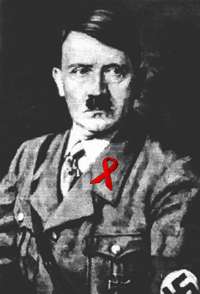 
“The people need wholesome fear; they want to fear something. They want someone to frighten them and make them shudderingly submissive.”
— Ernst Roehm, gay leader of the
Nazi SA Brownshirts

“We have created our myth. The myth is a faith, a passion. It is not necessary for it to be a reality.”
— Benito Mussolini,
The Naples Speech, 1922

Have you ever noticed how defensive, angry and hysterical many HIV diagnosed gay men become when you inform them that HIV does not exist?

It is as if they need the necessary HIV lie to sustain their existence; the virtual HIV acting as an identity crutch to fill up a void. Many attributes of the HIV Homofascist Movement (or HIVism) resemble those of Fascism and the psychology of the Freikorpsmen: an authoritarian personality; extreme emphasis on the masculine principal, male dominance and blood brotherhood bonding; exclusive membership of an elite in-group; and the fetishization and aestheticization of suffering, self-sacrifice and death.

Freikorpsmen made war a way of life where desiring production becomes death production. Many HIV Blood Brothers see the war
on AIDS as a way of death where the Freudian pleasure principle and the death drive become indistinguishable. The Swastika armband has now been replaced by the HIV positive tattoo and the red ribbon.

Fascism and HIVism are totalitarian regimes based on a single-party system with an overt celebration of myth and the anti-rational through the powers of rites, rituals, and group hysteria trance bonding. The initiation rite to join the HIV Blood Brotherhood is the blood sacrifice of the putative HIV test. A positive status initiates you into the HIV Freemasonry.

One can see actual group hypnotic trance phenomena working within both Fascism and HIVism where devotion, ceremony, and obedience are called upon and used by the cloned membership of the elite in-group. Fascism and HIVism, as products of group hysteria, are psychologically contagious cultural/social beliefs spread through mass hysteria, mass-hypnosis and mass-media. Psychologist Gustav Le Bon stated: “In a group, every sentiment and act is contagious, and contagious to such a degree that an individual readily sacrifices his personal interest to the collective interest.”

Theodor Adorno gave an account of the regressive psychology of organized groups which fits the ethos of the HIV Homofascist Movement: “What happens when masses are caught up by fascist propaganda is not spontaneous primary expression of instinct but a quasi-scientific revitalization of their psychology - the artificial regression described by Freud in his discussion of organized groups. The psychology of the masses has been taken over by their leaders and transformed into a means of their domination. The collectivization and institutionalization of the spell have made the transference more and more indirect so that the phoniness of enthusiastic identification and the dynamics of group psychology have tremendously increased.”

HIV Homofascist Identity works through clone-imprinting and mimetic desire. We desire what others desire because we imitate their desires; thus HIV belief is psychologically contagious. Many gay men long to belong to the HIV Blood Brotherhood because they feel secure and at home in this slave-morality clone-zone where blind belief replaces autonomous thinking. At a psychological level, the price for the passionate devotion to HIV Belief is giving up a critical faculty: when people leave HIV Belief (like leaving Scientology) you see them regain their critical faculty. There is no loyalty without hatred: passionate membership to the HIV Homofascist ingroup can fuel hatred for the outgroup (the HIV-negative outsider or HIV non-existentialists) - seeing AIDS dissidents as a threat and obstacle to their blind HIV Belief.

Giggles from the Gas Chamber

AIDS doctors (like Nazi doctors) operate through genocidal bureaucracy using pseudo-science to justify sexual ethnic cleansing. Many gay men branded HIV-positive passively accept that they are marked for slaughter, slavishly sign their own death warrants and run giggling into the gas chambers. One Nazi doctor, Robert Jay Lifton wrote: “The genocidal bureaucracy contributes also to collective feelings of inevitability. The elaborateness of the bureaucracy’s organization coveys a sense of the inexorable - that one might as well, as a perpetrator or victim, go along because nothing else can be done. Under certain circumstances, victims’ bureaucracies can be coerced into participating in their own people’s victimization.”

Today, the many AIDS bureaucracies run by gay careerists are participating in their own queer brothers iatrogenic and psychogenic annihilation. Fascism is said to be an example of the administrative mechanism of power coupled with old symbolisms of blood associated with the order of sovereignty. HIVism is genocidal bureaucracy initiated by blood testing rites sanctioned by totalitarian science. Plus ça change?

Fascism and HIVism seek to control all information and media. Words can kill: HIV Propagandists continually use highly emotive epidemic hysteria to whip up irrational fears in the masses and resort to ad hominem attacks when dissidents deconstruct their HIV illusions.

Fascism’s obsession with rebirth, the new man, youth and the cult of the masculine is found in the Leni Riefenstahl inspired body images promoted in HIV pharmaceutical advertisements. Such HIV Volkisch Kulture imagery is the Nazification of the Queer Body Politic. We must destroy what Martin Heidegger would call the “inauthenticity” of HIV Homfascist Identity and reclaim our homosexual being because HIV does not exist.

What has been falsely nominated HIV is a rubbish-tip of non-viral material, microvesicles, mock-virus, cellular-proteins, junk DNA and gene products. No pure particle of HIV has ever been obtained free of contaminants; nor has a complete piece of HIV RNA (or the transcribed DNA) ever been proved to exist. No electron micrograph image exists of cell-free HIV particles recovered directly from fresh uncultured donor plasma.

It is time we set up an AIDS War Crimes Tribunal and put Baltimore, Curran, Delaney, Fauci, Francis, Gallo, Ho, Montagnier, Tedder, Weiss and others on trial for perpetuating the global HIV fraud.

In 1980, Robert Gallo’s first human retrovirus, HL23V, was declassified as nonexistent. HIV must now also be declared nonexistent and gay men must burn their HIV draft cards. No one is HIV positive.