"♪onathan: You were very delightful to me; your love was wonderful to me, exceeding the love of women."

& blasphemers get particularly panicky when confronted with the Scripture above. Sloppy apologists sometimes try to explain away the verse above by claiming Jonathan was simply David's "best friend" & their relationship was made on the battlefield. These lax apologists try to frame the Scripture above in that context (disregarding the actual meanings made so clearly in the original language)! Consider the liar below in purple text:

If that's so easily explained - perhaps this same lax (former military) apologist can name a "best friend or 3"  who's "love exceeded the love of women."! The spouse of "said apologist" should be delighted to hear about "said friendship/s"! Also notice that the liar above in purple didn't use the term "love" when describing this "COMRADESHIP". Why Not? Because he knows that the "LOVE" he's trying to equate to David & Jonathan isn't the same as he's describing - hence his use of the term "COMRADESHIP"! The battlefield does indeed make some tight friendships - true (G0YS abound)! Do ALL of those friendships therefore equate to the message being relayed in the Hebrew text shown above? NOT EVEN CLOSE! (Ask a Rabbi what happens to the term "Love" in Hebrew (AHAVAH) when you put the letter TAV on the end of it)! Hint: It becomes TRUE-LOVE.

So let me tell you about the guy who spoke the lie above in purple text.  He came from a broken home and in 7th grade he made friends with a guy who would -years later- go on to be the best man at his wedding. This future "best-man" would also be the same guy who would drive 150+ miles each weekend to pick his friend up from college in order to spend time with him & take him to church - where this same future "preacher of poison" met his bride-to be.  The same committed friend ended up investing so much time & resources in his buddy that he was able to claim his as a dependant on a tax return! Twice! This same friend ended up buying contact lenses for his buddy's brother, put food in his buddy's mother's cupboards more than once; -drove to another state to recover his buddy's stolen car; - lent another brother (of his buddy)  money that never got repaid. This "friend" who had compassion on his buddy from the broken home was also a Kinsey-6 G0Y! That committed friend was me. And I am ashamed that the guy I poured my affections & resources out on has become (& worse - remained) such a caustic bigot, & bully - profaning the name of the God he hallucinates that he speaks for!

But more astonishing is that the guy who made the statement above in red-text - also has a sister who is a lesbian! But rather than lift a finger & do some research (& grow balls of his own to confront his bigoted in-laws); -This poisonous preacher would rather curse the friend who was closer than a brother & deny his own sister the knowledge of reconciliation & delivery from the condemning messages of false religion. The Scripture has a warning: "If anyone returns evil for good, evil will never leave his house."

David meant what he wrote! Prince Jonathan - in DIRECT lineage to the throne said that David was going to rule & he would be beside him! Why would a man give up the right to rule a kingdom & then bind his name in covenant to sit beside the King he abdicated to! Think! The term is "Paramour"! Only someone who lacks basic empathy would dare to try characterize such an expression of intimate affection as anything other! 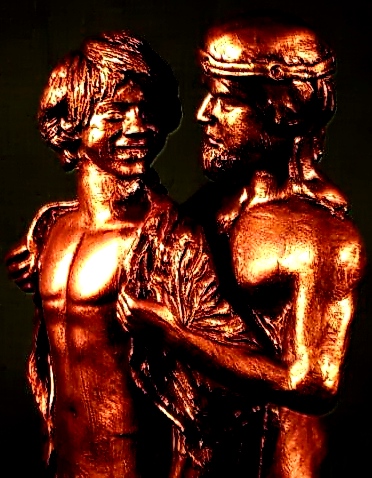 But let's look at some of the evidence & combine that testimony with what we know of the practices of the day: The Scripture records: "Then Saul’s anger burned against Jonathan, and he said to him, “You son of a perverse, rebellious woman! Do I not know that you are choosing the son of Jesse to your own shame" - 1 Sam 30a. "Choosing"? What type of "choosing"? And why does Saul connect this "choosing" with "shame"? Let's keep looking. It is written: "...the soul of Jonathan was knit to the soul of David, and Jonathan loved him as his own soul. ... Then Jonathan and David made a covenant, because he loved him as his own soul. And Jonathan took off the robe that was on him and gave it to David, with his armor, even to his sword and his bow and his belt." - 1 Sam 18:1-4  Take a close look at the text that is in crimson.  David moves into the king's household to be with prince Jonathan.  And they make a COVENANT of LOVE between each other. Are you figuring this out? The last thing we see here is Jonathan disarm & disrobe before David.  The implication is that the same clothes Jonathan wears are now for David & that Jonathan's trust is absolute. THEY WERE PARAMOURS...on par with  FAMILY. LOVERS (hence that continual commentary about loving each other as they love themselves). A key admonition given to married couples in the New Testament was drawn directly from this example of a same-gender couple in the Old Testament!  From the examples given in the Song of Songs, - we know that the Scripture always veils erotic language in symbolism.  Such language is never vulgar or direct, but instead - full of symbolism that only a mature, comprehensive mind can understand the implications thereof.  Therefore, when the text about David & Jonathan says things such as: "the souls of Jonathan and David were knit together, and Jonathan loved him as himself"; --You need to turn your brain to its full-on mode and ask yourself the question: "What is it that a guy does that is an act of 'love unto himself'"!Understand? !!!

The relationship between David & Jonathan (a few years older than David) can be described with a great degree of certainty as pederastic by its nature.  And contrary to the contempt the modern use of the term has fallen into; - the ancient context was much nobler & so widely practiced (due to that "human-nature" thing) - that it was probably never anticipated that a time would come where the practice would fall into disrepute.  THAT is the context of what Saul's comment to Jonathan about CHOOSING David implied. THIS love is why Jonathan was willing to give up a kingdom & support the one who would take it over! And this is what pissed off Saul (a man the Scripture says had abandoned his following of God)!

Details matter. Actions matter. And the Hebrew law covers very specific details (for good reasons)! So, let's be direct: According to the Torah - ejaculating onto yourself or being with another when it happens is dealt with by taking a bath. It's NOT SIN because no sacrifice for sin is demanded. Read that until it sinks in. When you understand that AnalSex is a specific act forbidden (under pain of death) - then male/male intimacy can be restored to its contextual & historical place of intimate respect. Once you recognize the relationship between David & Jonathan as pederasty & understand fully what that entailed - then everything else the Scripture tells us about them (including the citation at the top of this page) makes absolutely perfect contextual sense.

To be astonished about the positive examples of same-gender attraction in the Scriptures, - Resume here.