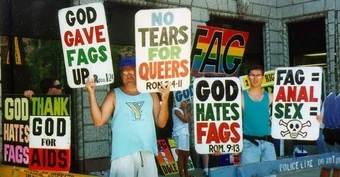 Is that the Verdict on you as well?

For years, the media brought us the twisted "God Hates Fags" message from the likes of Fred Phelps & Baptists like Westboro, - as they picketed events to highlight the death or demise of some person/s whom they declared to be "FAG/S".  Since the definition of "Faggot" is "a bundle to be burned" (hence the British term "fag" for a cigarette), - I would agree that according to the Scripture -those who the wrath of God falls on end up with the same fate. So, ironically: I'm partially in agreement with FRED on the point of God hating "FAGS". What I disagree on is WHO the proverbial FAGS really are.  At the time of writing this, I have little doubt that the likes of FRED is indeed, a FAG. Are you one, too?

To summarize FRED's position: Baptists like Westboro (& the SBC) teach that those who engage in any sort of same-sex activity are "FAGS".  In Westboro's SBC world: Those acts (whatever they may be) make a person into a "FAG".  So, in the context these "Baptists" (& others) use, the term "same sex intimacy" makes a person into a "FAG". Westboro probably even teaches that a person can be a "FAG" on the inside without acting on it -just as a person can harbor murder or adultery in their heart, -right?  What they willfully ignore is the fact that the original-language Scriptures themselves are extremely precise in distinguishing what specifically is SIN, -vs. the sloppy rumors of it.

As I said before, -Baptists like Westboro teach that merely having same-sex intimacy makes a person into a "FAG". No doubt that they sloppily cite passages such as Leviticus 20:13:
(

) to derive their twisted conclusion.
As we've explained at g0ys.org -the phrase translated "as he lies with a woman" frames the context of that passage -because under the Law of Moses, there was only (1) context in which a man was considered to be "laying with a woman" -via vaginal penetration (throw your Karma-Sutra of unjust measures away).  It's also the same criteria that determined if the act of "adultery" had been committed. Makes sense, right?  In the context of Leviticus, a "man laying with a man as he lies with a woman" describes an act which actually violates several principles of Torah all at once via anal-sex.

And it is specifically that act (AnalSex) that the Torah puts a death sentence on (& for a very good reason when you consider it spreads diseases explosively: +5000% more risk)!  This is why the Torah has no parallel passage forbidding women laying with women (& that absence speaks volumes regarding this issue).
Those like the Baptists of Westboro & SBC have such sloppy theology that they often try to say that "Although Moses didn't forbid Lesbianism in the Torah; -Paul did in Romans chapter 1."; -- As if Paul would try to add a single word to the Torah of God! Paul wrote that he would NOT go beyond what was written in the Law (Torah) so that his disciples would learn from the example & not become falsely prideful (1 Cor 4:6)!   Peter warned about ignorant people who would distort Paul's writing & destroy those listening to them by doing so (2 Pet 3:15-16)! And we see that happening today -all around -as sloppy theologians attempt to morph a prohibition against anal-sex into a commandment forbidding all same-sex intimacy.
However, those such as Fred Phelps & the SBC have abandoned any thoughts about God having REASONS, or in this case -principles such as punishments fitting the "crime".  And, even worse: With their sloppy theology -they make false allegations of crimes supposedly having been committed -& this is what makes them "G0D-DAMNED FAGS" -by the Scriptures' own testimony against such false accusers!

The Law of God is completely comprehensive.  If a man accuses another person, and the accusation is eventually proven false; --The matter does not end there!  The Torah prescribes a penalty for the false accuser! The Torah instructs to do the same thing to the false accuser that would have happened to the person they falsely accused -if that person had been convicted (Dt 19:16-19).
So:  In the case of those accusing others of violating Leviticus 20:13, - who have N0T engaged in anal-sex: According to the Scripture itself - the penalty to that false accuser is DEATH (& then by their own "false Phelpsian standards", - usually DAMNATION as well).  Seeing that I'm using the New Covenant as my standard: I'll trust God to deal with both aspects of the judgment!

So here's the great irony taught by the Scripture: Any person teaching that mere same-sex intimacy is a "damning abomination", is -under the very law they cite, -the damned abomination themselves! Are your "church elders" going to hell? Probably ... and they're the ones sending themselves there!  Seriously.  God is not mocked, & Jesus taught that the measure a man uses will be the measure he himself is judged by (Mt 7:2). So, when a man's measure condemns the innocent, -what amount of propitiated righteousness will save such a lawless judge? And so Paul's warning to the Romans finds context: "But according to your hardness [fig., obstinacy] and impenitent heart, you are storing up for yourself wrath in [the] day of wrath and of revelation and of [the] righteous judgment of God" -Rom 2:5

And the second irony is that most so-called "ministers" will not repent of their obtuse, destructive messages against same-gender-attracted people -because the consciences of these "ministers" have been seared by the hot iron of their own self-righteousness! And while such men cite passages as Romans 1:26-27 (out of context -as Peter warned that they would) to try to condemn everyone with mere same-gender affections; -they themselves are guilty of becoming as those Paul condemns in Romans 1:28-32!  They have laid aside the righteous principles of God's law - to preach against their own mere prejudices! And to them & their likes the words of Jesus against the religious hypocrites of his day will come to be seen as true in the now: "How horrible it will be to you, -religious hypocrites! Because you shut off the way to the kingdom of the heaven to people; --And as you'll not enter yourselves, -you stop those who would do so!" - Jesus Mt 23:14 Their damnation will be GREATER!

According to the Scripture, Solomon had 700 wives & 300 concubines (say "concubines").  And his father David had bonded intimately with Jonathan - of whom David wrote of in lyric: "I am grief-stricken over your loss, brother Jonathan; your presence elated me; -& your love for me was wonderful - surpassing even the love of women.". (2 Sam 1:26)

And yet Jesus said: "I am come that they might have life, and that they might have it more abundantly.".  So, reader, -you say: Does this "more abundant life" that Jesus spoke of depend on a set of "restrictions" not even known in Moses' Law?   And if a man visits your congregation having only 7 wives & 3 concubines; --Will you call him a 'sinner' for his supposed 'excesses' or will you consider him conservative -having merely 1% of Solomon's estate!

Do you have an understanding of God in your thought process; --or is your criteria for 'sin' merely the codification for weakening the consciences of people under mere rules taught by men? The Scripture says that evil men 'invent ways of sinning'. Is that the method of operation of your 'religion' -- to make what wasn't a sin -into one? Does the world curse God because of your sect's misrepresentation of Him?

To the likes of Fred Phelps of Westboro Baptist and all other FAGS as well: You would do well to find real repentance.