Phew! Neither am I. Religion, by definition, means 'to bind'. Traditionally, what it has meant is: "To bind to an abstract rule set.".  Many times, in many cultures, -- those rules are vague, unfair, illogical & do not discern between acts that harm others vs. acts that merely break some 'rule'.  For the most part, "religion" is evil - and that evil is obvious by what it DOES, (not by what it proclaims) -- for it often espouses the very opposite message of how it acts.  Jesus pointed that out, and the religious establishment of his day conspired to kill him.  So much for institutionalized "religion".  It always seems to gravitate toward evil attracting the power-hungry, manipulative & psychopathic personalities among us to its leadership.  Yeshua pointed that out (read Matthew 23 in the Bible).  God's way is better -and while the world may call it a "religion"; -genuine Christianity that follows the Biblical pattern of obedience to God is a very different thing because of how it BEHAVES ("By this shall all men know that you are my disciples, if you have love one for another." -Jesus {Jn 13:35}).  It is important to make this distinction - because there are many who claim to be Christian and are NOT.

However, not being "RELIGIOUS" does not equate to being faithless.  As a matter of fact, the Scriptures record Jesus stating that the greatest faith he found was not in Israel among his own people, -but from a Roman Soldier who requested that Jesus heal his "Beloved Servant" (Doulos-Pais).  "And a certain captain had a servant who was very dear to him; this servant was ill and near to death. And when news of Jesus came to his ears, he sent to him rulers of the Jews, requesting that he would come and make his servant well. And they, when they came to Jesus, made their request warmly, saying, It is right for you to do this for him, because he is a friend to our nation, and himself has put up a Synagogue for us. And Jesus went with them. And when he was not far from the house, the man sent friends to him, saying, Lord, do not give yourself trouble: for I am not worthy enough for you to come into my house: And I had the feeling that I was not even good enough to come to you: but say the word only, and my servant will be well. For I, myself, am a man under authority, having men under me; and I say to this one, Go, and he goes; and to another, Come, and he comes; and to my servant, Do this, and he does it.  And when these things were said to Jesus, he was surprised, and, turning to the mass of people coming after him, said, I have not seen such great faith, no, not in Israel! And when those who were sent came back to the house they saw that the servant was well." - Luke 7 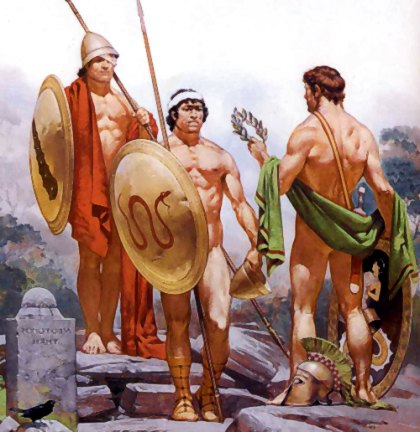 Yeah, the greatest faith Jesus said he found came from a guy outside of the faith of the very group of people Jesus came to save, and that man happened to be g0y!  See, at the time it was the practice of ranking officers in the Roman army to "draft" a teenage guy into service to help with responsibilities.  The drafted guys were almost slave status -at least in the eyes of Roman law.  You can imagine what went on behind closed tent "doors" - which is one reason why the reputation of the Romans was so detested by the Jews.  In the particular account recorded, we have an example of a soldier who had a servant -- but one that was "very dear" to him. The Greek is "ENTEEMOS" which translates as More-Noble.  Combined with "DOULOS PAIS", a picture begins to emerge that this was no ordinary soldier/servant relationship.  For the soldier to have sought out this "Jesus" was remarkable in itself -- humbling himself (a Roman soldier) before a Jewish guy who had himself taken on the role of a servant!  See, a hardened soldier would have simply drafted another guy to replace the one dying.  However, there was a bond between this soldier & his "servant" that went deeper than the social customs of that day.  After all, while this servant was ill, who was taking care of him?  The soldier was.  Another hint at the relationship is when the soldier said that he was not worthy to have Jesus in his house.  This is a humble, veiled way of saying that he did not keep a nice "Jewish" household.  There was probably only one bed -- if you get the picture.  However,  Jesus did not pry for more information (he already knew) ... neither did he judge nor condemn the relationship because - it becomes obvious that it was not an exploitative relationship.  What he did do was comment on the man's faith (I suspect with a 'wink of understanding') & the servant was healed (from some sickness about to kill him).  I also note that the soldier did not have the 'sickness' himself (ergo: no anal-sex in that tent, hence the soldier did not catch what his servant had).  G0ys in the military?  Yup.  2000+ years ago!

Obviously, mere-religion has usually done an extremely BAD job of portraying God.  Why?  Well, the ignorance & prejudices of men get in the way.  As a matter of fact, this is such a problem that if you read the Scriptures, you'll find that God's solution to doing things the right way is to inhabit the body of the people who are willingly yielded to him, & do the job Himself!  This theme of "possessed by God" is recurrent throughout the Hebrew Scripture as the primary means where God's will gets done.  Problem is, too many people who claim to follow him are not Possessed by Him.  Instead, these rebels insist things like "we have the whole Bible" with which to figure things out.  If that was so easy, why are there hundreds -- if not thousands of religious sects all claiming to be the "way" based on their Biblical interpretations?  According to their own Bibles, FACTIONS are a manifestation of fallen humanity & it's shortfalls...which of course, should be self evident in any group trying to accomplish something - when division nullifies their efforts.

The Apostle Paul wrote about the basic morality built into people -even who were not 'religious'.  This is what he said: "(Indeed, when Gentiles, who do not have the law, do by nature things required by the law, they are a law for themselves, even though they do not have the law,  since they show that the requirements of the law are written on their hearts, their consciences also bearing witness, and their thoughts accusing, - even defending them.)" - Romans 2.  Those of you who aren't 'religious', but G0Y, have already proven that the requirement of the Law of Moses against Anal-Sex is written on your heart.  You've become a "law unto yourself" in that regard.  That doesn't seem like an oppressive religion to me?  You?  Of course, what does it mean when you violate your own conscience -- break your own rule?  Or, what happens when your conscience is clear, but you've still managed to do the wrong thing -- perhaps unknowingly?  Hmmm? If you know about LAW & JUSTICE, anyone who finds themselves in such a situation has a serious problem.  How can you fix the past? And those dilemmas are what true, grace-centered Christianity actually addresses.

Where all other "religion" falls short - is in it's complete lack of ability to solve such (ex-post-facto) problems, & the problems spawned in the aftermath.  Religion sets you on a path of busy-work, trying to atone for that which you cannot fix.  Consider it: If you punched someone in the nose & broke it, how does saying 1000 "Hail-Mary's" fix that?  Religion is generally built on lies & fraud.  (However, there is nothing about saying those "Hail-Mary's" in the Scripture to begin with; --So by what authority...)  Remember above where I wrote: "Well, the ignorance & prejudices of men gets in the way."?  What did Jesus himself say about repetitious prayer? "Now when you pray, do not use vain repetitions [or, many meaningless words] like the Heathen, for they suppose that they will be heard by their many words." - Mat 6:7 If Jesus own words show us that the Catholic Church (the largest & oldest sect proclaiming itself 'Christian') members act like a bunch of HEATHENS when they pray, -- this should be a wake-up call about vain 'religion' in general!   To follow Jesus, you need to be willing to lose your religion!  Sound ironic?  Jesus himself said: "You cannot be my disciple, unless you love me more than you love your father and mother, your wife and children, and your brothers and sisters. You cannot come with me unless you love me more than you love your own life. " - Luke 14:26 And if there was any hallmark that identified "religion" is the way it tends to become the focus of a person's life.  Following the pattern of Jesus is different.

Basically, you can strip away the building, books, forms, rituals & externals.  Without those, religion ceases to exist, but a relationship with God is independent of those, anyway.  This is the message Jesus carried. It is written: "Our fathers worshiped on this mountain, but you Jews claim that the place where we must worship is in Jerusalem." Jesus declared, "Believe me, ... a time is coming when you will worship the Father neither on this mountain nor in Jerusalem. Samaritans worship what you do not know; we worship what we do know, for salvation is from the Jews. Yet a time is coming and has now come when the true worshipers will worship the Father in spirit and truth, for they are the kind of worshipers the Father seeks.  God is spirit, and his worshipers must worship in spirit and in truth." - Jn 4

So then: Jesus himself said that those who worship God no longer need be "in Jerusalem".  That was a profound statement because prior to his coming, the ONLY PLACE to worship the one true God was in Jerusalem!  Ironically, Jesus made it possible to have a relationship with God anywhere you are at -- without needing to be "religious" about it!  For people weary of the endless formalities & demands of "religion", this is great news!  We don't need their stink'n 'program'!

Spirit & Truth.  Faith & Love.  Intangible & unscripted!  It starts with SPIRIT (see Acts 2 -- especially v. 38-39).  As long as Yeshua's Spirit dominates, He leads into all truth.  How do you think G0YS.org happened?

I wanted to take a few paragraphs to point out & fix a common misconception that people unfamiliar with the Scriptures often assume.  People who do NOT know the Scripture often incorrectly presume that:

The Scriptures testify to something astonishing about the form of our present existence and what God is actually up to.  And I will tell you that anyone who has a background in computer science and object-oriented programming can testify to just how completely rational the explanation is.  As a result, -I will use technology metaphors to explain this in modern terms (And please keep in mind that the metaphors I choose are based on aggregations of my understanding of the Scriptures AND my background in computer science (among other areas of knowledge).  There are some systems of understanding that cannot be realized without substantial education and we have reached a time where these issues can be rearticulated into their telling analogies: "Daniel, I now command you to keep the message of this Book secret until the end of the age..." - Dan 12:4a  We're almost THERE...